We’ll be back in the autumn but until then, why not read: ‘Miley Cyrus Fault’ by Erinna Mettler…

Erinna Mettler's first novel, the Brighton-set Starlings, was published in 2011 by Revenge Ink and was described by one reviewer thus: ‘We read this and feel as though we know Brighton intimately, just as we get to know Baltimore inside and out in The Wire.’ Erinna is a founder and co-director of the spoken word collective Rattle Tales and the newly established Brighton Prize, the city’s only short story competition. She is also an experienced tutor and mentor. Erinna’s short stories have been shortlisted for The Bristol Prize and The Writers & Artists Yearbook Arvon Award. Her stories and poems have been published internationally in journals such as Riptide, Swamp and The Manchester Review. She has a special interest in writing for performance and her career highlight so far was having a story read by a Game of Thrones actor at Latitude Festival. 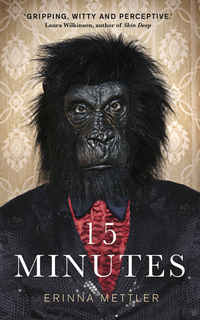 In The Future Everyone Will Be World Famous For Fifteen Minutes is, of course, Andy Warhol’s (often mis-quoted) 1968 prediction about celebrity culture. This short story collection is about fame and how it affects ordinary people; the need for it, the obsession with celebrity, the missed chance, the chance encounter.

In most of the stories the famous have only a bit part in the tale of an ordinary individual, existing just outside the action but still influencing the outcome. We get the story of a tramp in New York on the day John Lennon was shot, a doctor remembering a childhood visit to a Muhammad Ali fight, a woman’s obsession with Harry Potter following the death of a child. Some of the stories are more concerned with the personal need for widespread attention. Some feature invented celebrities.

These stories are modern, experimental, cinematic, moving and always thought provoking. Almost all genres are represented; there is literally something for everyone.

Get your fiction fix every Friday: subscribe to The Weekend Read to get the best short stories written by women delivered direct to your inbox, every week.

Want to see your writing featured by The Weekend Read? Read our submission guidelines and send us your stories.

Kerry Ryan is Fiction Editor for The Weekend Read. Her writing has featured in international publications and various journals including, most recently, The Manchester Review. Kerry has a PhD in creative writing and is founder and director of Write like a Grrrl which offers creative writing courses for women across the UK in collaboration with For Books’ Sake.

Anna Wilkinson is Associate Editor and has a BA in English Lit. and Creative Writing. She has edited extensively for the charity sector in both digital and print. Anna has always lived in London, where she is part of a women’s writing group. She writes short fiction.

Sophie Hanson is Editorial Assistant. A graduate of the Write Like A Grrrl programme, her poetry and short fiction have been featured in print and online, most recently in Dear Damsels. By day she works as a subtitler for television. She lives in Manchester with two budgies, and is currently working on her first novel.